I have some very good news to share today.
As you may know, in August I was diagnosed with diabetes and on August 16th I started getting insulin injections twice a day. I was quite good about it even when my mum was having a bit of trouble getting her injection technique right! Sometimes I had to go to the v-e-t so I could have my blood tested to see how much sugar was in it. When I was diagnosed my blood sugar was up at 28 and it is supposed to be between about 4 and 9!
As well as getting insulin I had to change my diet and not eat any more dry food because it is bad for diabetic kitties. Now I eat a special kind of stinky goodness which is low-carb and low-sugar but luckily even though it is healthy food I really like it so I gobble it all up!
My mum spent a lot of time reading helpful advice on the Feline Diabetes Message Board and she learned how to do home-testing of my blood every day. That means I sit on her lap and she sticks a needle in my ear and steals some of my blood and puts it in a little machine which tells her a number. We found this quite hard to do at first even though I am pretty co-operative. Sometimes it takes her a few tries to get some of my blood and I don't really like it and I shake my ears about but I still keep purring! I do get treats afterwards so, you know, I reckon it is worth putting up with a bit of hassle.
Anyway, the very good news is that my blood sugar numbers have been so good lately that I have not had to have an insulin injection now for 9 days! And during the 9 days I have been without insulin my blood sugar has stayed between 4.4 and 5.7 the whole time, which means my pancreas has decided to start working again! My mum says this makes me a furry lucky kitty because this only happens for some diabetic cats.
My mum took me to the v-e-t on Thursday evening and showed him all my blood numbers and he said I was doing furry furry well indeed and that me and my mum were doing a good job. He also said I had lost another 800g in weight since my last v-e-t visit, which was also good because I am supposed to be slimming. The v-e-t said I could stay off insulin unless my numbers go up again, and if everything keeps going well then soon my mum can start testing my blood just weekly instead of daily.
So YAY! I am officially (paws crossed) in remission for now! And this is a picture my mum took this very morning to show my friends how healthy I am looking today. 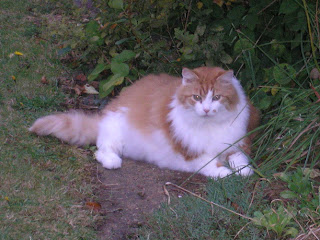 And in case you are wondering what I am looking at so intently, it is this... 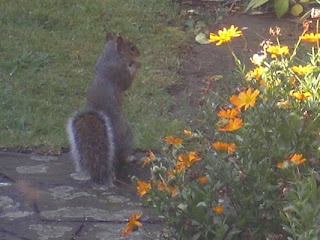 Good news is still pending, but in the meantime...

A nice lady called Karen who has another diabetic kitty has turned an old photo of me into a LOL Cat! Here I am... 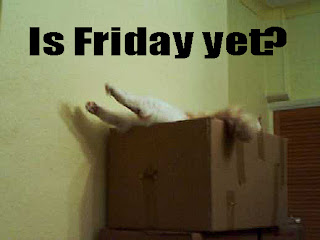 Thanks Karen! You made my mum laugh after a day with the class from hell. Karen's cat Pearl has a blog called Pearl the Diabetic Cat *waves paw to Pearl*.

Well, it was quite a strain looking after my mum and the house while my dad was off climbing mountains in Scotland. I was glad when he got back on Friday night and I could hand over some of my responsibilities. He was pretty tired after all that climbing so we have been mainly relaxing together this weekend while my mum has been off shopping and going to the theatre.
This picture of me and my dad is a little blurry, sorry about that, but doesn't it just say Easy Like Sunday to you? 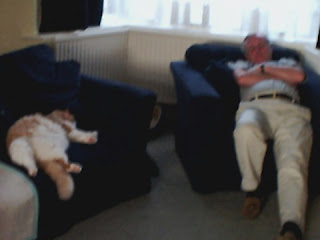 P.S. I may have Very Good News to share later this week...stay tuned! 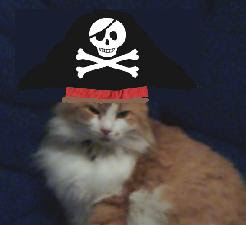 Ahoy, me buckos! I be joinin' in Meow Like A Pirate Day! Just call me Cap'n Fat Eric The Fearless. Who wants t'join me crew? I be off t'try some o' the piratical delights in store at Pirate HQ. Arrrrrrr. Yo ho ho and a can of tuna...
P.S. My dad made it to the top of Ben Nevis!
# posted by Fat Eric @ 6:52 pm 30 comments

Lots of my friends have been asking how I am doing with my diabetes. I am doing fine, although my blood sugar is still a bit up and down. I have to go back to the v-e-t in about a week. I am acting like my normal self - eating, sleeping, licking humans, purring a lot, patrolling the house, etc. My mum changed the brand of stinky goodness I was eating to a healthier brand which is good for diabetic cats. Some humans have trouble getting their cats to change brands, but my mum knew I wouldn't fuss! As long as it is food... I liked the new brand (Butchers Classic) straight away and especially the Game and Trout flavours! Yummy.
We had an amusing incident tonight. I was watching TV with my humans and my dad wanted to find the TV guide. He looked all over the living room for it - on the sofa, under the sofa, behind the TV, on the table...he even went into the kitchen looking for it. I was watching him and "laffin and laffin", as Jeter Harris would say. Guess what? I was lying on the TV guide! When I had finished enjoying the joke, I got up and strolled off and there it was all the time!

My mum is a bit stressed out at the moment because she is finding her new class very hard work. Although they are the same age as last year's class, who were mostly very nice, this lot will need a lot of training before their behaviour is how she wants it. She reckons it could take until Christmas to get them into shape! I am trying to relieve her stress by purring and snuggling with her a lot. My dad tried to cheer her up yesterday by buying her a pencil topper for one of her teacher's pencils. What do you think? Does it remind you of anycat? 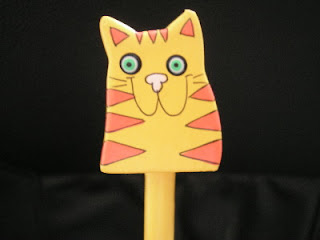 My dad is going away tomorrow morning to Scotland for a few days. He wants to climb Ben Nevis. He has climbed it twice before but never quite got to the top, and he says if he doesn't do it this time he'll be too old! I am in charge of looking after my mum and the house until he comes back on Friday night. Keep your paws crossed that he gets to the top this time and doesn't fall off!

The Most Famous Cat In Britain

Or my friends Eric and Flynn, or Princess Pearl, or Pandora and Charlie, or any of my other fellow-Brits in the Cat Blogosphere. We are all quite famous but none of us are followed around by crowds of press photographers like the cat I saw on the TV news tonight - thank goodness!

This is Sybil, who is now the most famous cat in Britain. 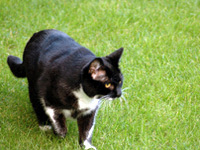 She is famous because she has just moved into 10 Downing Street in London, to help out the Prime Minister and the Chancellor of the Exchequer when serious political situations arise which only a highly trained kitty can solve.

Here is Sybil's official introduction on the British Government website.

And here you can read another article about her and see a video of Sybil in action.

Good luck with your official duties, Sybil - the cats of Britain are right behind you!
# posted by Fat Eric @ 6:14 pm 32 comments

I am having some problems updating this week because my mum has just started teaching again and she has lots of start-of-term stuff to do and won't let me on the computer! So if I don't update much in the next week, that's why.
I have been doing some extra napping today to make up for my disturbed night last night. It all started in the evening when my humans were watching TV and I was having a lovely cosy sleep on my mum. Then they decided they had to go to bed early and I got disturbed! I was cross because I wanted to go on sleeping on my mum and she left me downstairs and went to bed - with some feeble excuse about wanting to get an early night to be ready to deal with her new class.
Having been disturbed, I went and finished off the food that was in my dish as a bedtime snack. Then I wandered upstairs and went to jump on my dad's pillow for a cosy sleep. Unfortunately, he had just gone to sleep and he brutally evicted me from his pillow and off the bed, moaning something about me disturbing him!
I went back downstairs and slept on Scratchy Mouse for a while, until I woke up again. It was dark and my stomach had that "oh no, hairball coming!" feeling. I found a good spot under the dining table and yakked up the hairball and most of my bedtime snack. Then my stomach felt so empty I knew I wouldn't be able to sleep without another snack. I ran back up to the human bedroom and jumped on the humans, mewing, "Hello! I'm really hungry now! Feed me!" My humans woke up, groaned a lot, looked at the clocks (3.30 AM), evicted me from the bed again and went back to sleep! Of course, I wasn't going to give up in a hurry, so I kept jumping on them until my mum staggered out of bed and sleep-walked downstairs to put a little snack in my bowl (This is much more likely to work these days now that I can play the "I'm a diabetic kitty and I might collapse from low blood sugar if you don't feed me and think how guilty you'll feel!" card).
Having had my snack, I felt much better, and I decided to spend the rest of the night snoozing in the doorway of the human bedroom, where the sound of my loud snoring could lull them back off to sleep...or not.
Despite my disturbed night, I was a good kitty and did not forget to jump on my humans again 10 minutes before their alarms went off, to make sure they got up nice and early for work. As soon as I had had my breakfast and my injection, I snuggled up on their pillows to catch up on some of my nap time. It's a shame my humans had to go to work instead of being able to spend the morning napping like me. As I drifted off to sleep, I could just hear my mum's cries of delight downstairs as she discovered the hairball I left for her.
I wonder if tonight will be so exciting? 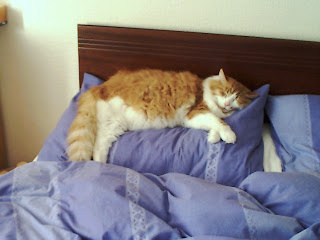