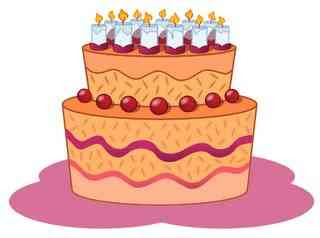 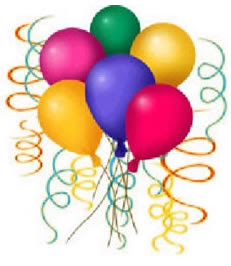 Yay! Do you know, last night I was wondering if my mum had forgotten it was going to be my purrthday today, but when I got GOURMET TUNA AND SHRIMP for breakfast this morning I realised she had remembered! She says we will celebrate properly with my presents this evening when dad gets back from climbing Snowdon.
Thank you to my friends who have already left purrthday wishes for me. I am officially 14 years old today, I think that qualifies me as a Geezer Kitty, don't you? My friend Derby sent me a fun e-card, thanks Derby! Milo and Alfie wanted to know why my Purrthday and Gotcha Days are celebrated on the same day - well, it's because my humans don't know my real Purrthday, because I was already 8 years old when they adopted me and Hattie from the cat sanctuary. So today is my Gotcha Day because it's exactly 6 years since I came to my forever home, but we celebrate it as my Purrthday too. Since my mum is on holiday from work today, I'm planning a full day of sitting on her lap and demanding Greenies. Come over for treats, everyone! 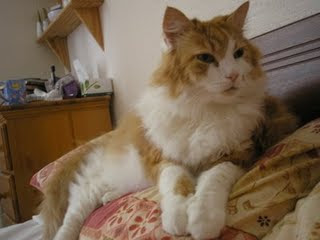 I had a post lined up today all ready to tell you stuff that's been going on - my mum is on holiday from school for a week, so lots of quality time with her lined up, my neighbour kitty Lofty is doing really well running round his house on three legs, my dad has gone off for the weekend with one of his French friends to climb Mount Snowdon in Wales, my Cornish Auntie had a birthday and that Evil Intruder Kitty Marmite is back and more of a pest than ever.

But I'm changing my post because I am sad today and so is my mum. We found out that my good friend Beezer has gone to the Rainbow Bridge. 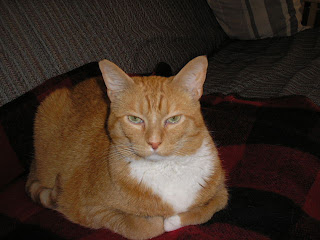 Beezer was one of the founder members of the Gorgeous Gingers and he was one of the best ginger kitties I knew. We are very sorry that he got ill and had to go to the Bridge. I am sending lots of purrs to his mum because she is really sad.

Also today we heard that Kimiko and BG have gone to the Bridge too. It is a sad day in the Blogosphere. Give your humans a few extra purrs today.
# posted by Fat Eric @ 9:56 pm 19 comments

We need some purrs for a kitty in trouble.

You've probably heard of my Uncle Andrew. He's a neighbour of ours and a friend of my humans. Sometimes when they abandon me and go away they leave Uncle Andrew in charge of coming over and feeding me, and he is pretty good at it (except for that time he forgot and I nearly starved but we don't talk about that...)

Anyway, Uncle Andrew has two kitties of his own at home. Lofty is a black and white tuxedo kitty and Panther is a black kitty. They have a cat flap in their door and they like to go out and roam about people's gardens, unlike me because I only go out in my own garden and then only when I am with my humans.

Something sad has happened to Lofty. One night recently he didn't come home at dinner time with Panther, and then he turned up very late that night injured and dragging his left hind leg. Uncle Andrew thinks he might have been hit by a car. Lofty was rushed to the emergency v-e-t and over the last week he has spent a lot of time first having surgery and then recovering. Now he is home being fussed over by his humans and given lots of treats, but poor Lofty had to have his leg amputated and part of his tail too. Although Uncle Andrew says Lofty has already learned how to run around the house on three legs when he is supposed to be resting. So far Uncle Andrew has paid £1300 in v-e-t's bills (that's about $2120 for my Mericky friends) but he doesn't mind the cost, he is just glad that Lofty is still with his family, even though we think he might have used up a few of his nine lives. Uncle Andrew says Lofty and Panther are grounded to their own garden for now, too.

Please send purrs to poor Lofty for a swift recovery as he learns to get around on three legs and purrs to his family who have all been very worried about him.
# posted by Fat Eric @ 8:43 pm 34 comments

The nights are drawing in. The evenings are getting chilly. The leaves are falling. The caretaker at mum's school is muttering as he uses his leaf-blowing machine daily in the playground. Yes, autumn is definitely here.
Which means that in our house my humans are now seeing much less of this: 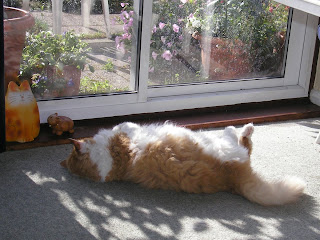 And, for the first time since May, more of this: 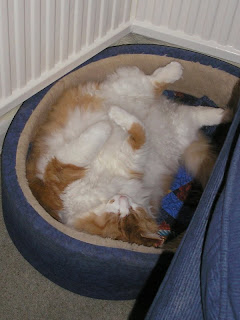 Yes, mum has started turning the radiators on in the evenings, which means it is time for me to rediscover my radiator bed. Mmm...cosy!
P.S. Thank you to all those who congratulated my dad on his 10k run. He is being good and keeping up his training even though he has done his big run. He is talking about doing a half-marathon next!
# posted by Fat Eric @ 11:07 pm 23 comments

Well, there were good and bad things about the weekend just finished. The bad part was that my humans left on Saturday morning and didn't come back till Sunday evening. Once again I was left to rely on Uncle Andrew to come and feed me and keep me alive. I showed my displeasure by throwing up on the kitchen floor.
My humans spent the weekend in Brighton & Hove because on Sunday morning 2000 people were running 10 kilometres along the seafront to raise money for Cancer Research UK. My dad was one of them. He finished in 1 hour 10 minutes and raised about £400. Altogether the humans running 10k in Brighton this weekend raised about £130,000. I guess that is a good thing.
Even if it does mean abandoning the kitty for the weekend. 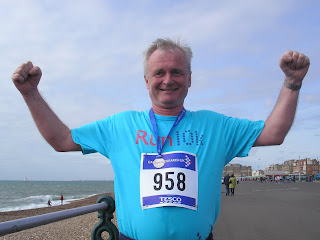