Not much to report. I am worn out from taking care of my mum and her broken leg. Tomorrow it will be six weeks since her accident. Six weeks has taken a lot of napping, sitting on the mum, and generally making sure that she rests the leg like she is supposed to. Tomorrow she is going for another X-ray and to see the doctor again. If she is lucky he might say tomorrow that she can start putting some weight on the leg, and then she can start getting around better.
My dad abandoned us this weekend and went off adventuring in the Yorkshire Moors with some healthy friends of his. Luckily my mum is able to feed me and Uncle Paul (another friend of ours) very kindly came round and cleaned my litterbox and watered mum's plants, two things that she can't do because of her leg.
It's a tough job being a carer but some kitty has to do it. Zzzzzzz.... 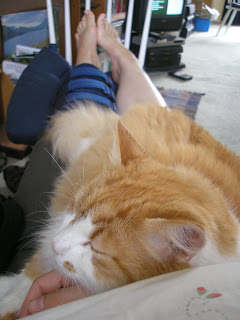 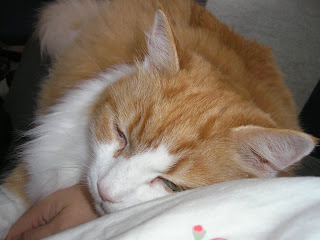 Oh yes, there has been murder and mystery around here!
The murder...at dawn one morning a magpie was found dead in the middle of our back lawn. There were feathers everywhere. Now a magpie is quite a large bird. What could have happened to it? (what with all those feathers everywhere, it didn't look like natural causes!) Well, it could have been a fox. Or an Evil Intruder Kitty. Obviously it wasn't me, because I am a pacifist non-hunting kitty and anyway I was locked in the house all night.
We do have a prime suspect...he says it wasn't him but he does have a previous history of catching frogs and birdies and even being caught before with feathers in the mouth...hmm... 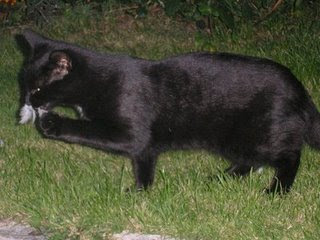 So Marmite is the Prime Suspect but we can't prove anything...
The other mystery happened yesterday. There are two ways of getting out from our house into the back garden - one is through the kitchen door and one is through the patio window. Both were open yesterday afternoon while my mum and I were relaxing at home. Then, towards evening, it started to rain. My mum got up to shut the patio window. She looked outside and saw me asleep in my hiding place behind the flower pots. She thought "I will shut the window to keep the rain out, the kitchen door is open if Eric wants to come in." She shut the window and went into the kitchen. It started to rain really hard. She thought "I need to get Eric to come in or he will get all wet." She stood at the open kitchen door and rattled some treats and called "Eric, Eric, come inside!" But there was no sign of me appearing in the doorway. Then she heard a loud "MEW!" from behind her! She turned round and saw me in the kitchen mewing for the treats in her hand...but how did I GET there when the patio window was closed and she'd been watching for me at the kitchen door??? She is still confused by my mystical kitty teleporting powers!
I know the answer of course, but I'm not telling!
# posted by Fat Eric @ 2:27 pm 20 comments

It's only Tuesday, but it's been a very eventful week already in my house. Yesterday my dad was supposed to get up at 7.15 a.m. to get ready for work but for some reason his alarm clock didn't go off. But luckily I was feeling hungry so at 7.20 I jumped on him and meow-meowed, which made him wake up and then realise his alarm hadn't gone off. Usually he isn't thrilled when I jump on him first thing in the morning, but this time he was pleased and called me a good little alarm kitty! After he fed me, I went back upstairs and snuggled up with my mum for a bit, because since she has been off work with her broken leg she hasn't been getting up that early.
Unfortunately, my humans haven't been so pleased with me since. Last night I waited till they had just gone to bed and turned off the lights and then I felt hungry so I started banging the door of my litter box loudly to get some attention. But that didn't work, so then I started making loud yakking noises in the hall at the bottom of the stairs. My dad put the light on and stumbled downstairs and said bad words, because I did actually yak a little on the carpet. After he cleaned it up I jumped up and down in front of my empty food bowl because now my stomach was empty I was really hungry. And guess what? He actually gave me some food to get me to shut up! Then he went back to bed, muttering. I really own him!
This morning after he had gone to work I waited for my mum to get herself up and dressed and downstairs. She opened the patio window so I could go out in the garden if I wanted to, and then she hobbled into the kitchen on her crutches to make herself some breakfast. Suddenly I saw Skinny Ginger kitty (who hasn't been seen around my garden for more than 3 weeks), lurking outside the window. I went out to chase him away but he didn't run! Next thing I knew, a red mist descended on me and we were REALLY FIGHTING!!! My mum heard us making a loud noise and came (well, not running but hobbling at top broken-leg speed) and saw a big ball of ginger fur flying on the patio. She yelled at us and waved her crutches and I suddenly realised I was in trouble! I skulked indoors and tried to look innocent and Skinny did the same outside. My mum checked both of us but couldn't see any blood or injuries, just a lot of bits of fur. You won't believe this, kitties - she called me a big bully, and I was only trying to defend MY territory! I think I should get treats for that. 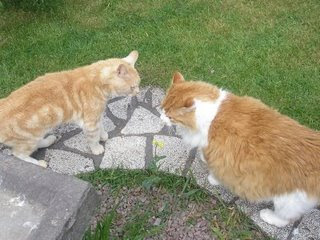 Then I decided to play a new game with my mum, where she hobbles across the room to get to her armchair and I jump up on the chair just before she gets there! Heh heh, that is lots of fun because she has to try to dislodge me while still using her crutches to stand up. I did it three times running this morning, I don't think she finds it as funny as I do.
So as you can see, even though it is only Tuesday it has really been a very eventful week already. My mum is going to visit her class tomorrow afternoon for the first time since she broke her leg 4 weeks ago. They have been missing her, apparently. There is only one week of term left and then they won't be her class any more. She is going to see a show they are doing on Friday too.
Oh yes, I nearly forgot...this is my 400th post!

The heatwave from last week has gone and it's been raining a lot, so instead of using my favourite hiding place behind the plant pots, I've just been napping indoors and watching daytime TV with my mum.
Yesterday she went back to the hospital and they took off the plaster cast on her leg! They put on this big blue brace thing instead, so that she can start practising bending her knee again up to 50 degrees. But she still isn't allowed to put weight on her leg or take the brace off at all in the next three weeks, so it doesn't make a lot of difference to what she can and can't do. In three weeks they might let her start trying to put weight on the leg and bend it to 70 degrees. If she was a cat like me, maybe she'd be a lot more flexible, I can bend my legs in all directions, especially when I'm having a wash!
I prefer the new leg brace because it is nice and soft for me to lie on, unlike that cast which was rather hard and uncomfortable. Also, what with it being dark blue and having Velcro on it, it shows off my white and ginger furrs very very well when I shed them on it!
I don't think this leg brace is enough to heal the leg, though, so I'm still keeping up the purring. She can't run away from me so I'm able to get in some good licks too.
Schlurp! Schlurp!
P.S. I'm sending some purrs to Cornish Grandma too - she had an operation on her hand yesterday because it never healed properly after she broke it last summer. Now she is all plastered up and can't do much. I'd go and schlurp on her too if I could!
# posted by Fat Eric @ 4:25 pm 32 comments

It has been very hot in London this week. In fact, you won't believe this but on occasions my mum has refused to let me guard her and the leg by playing lapkitty - some excuse about "it's just too hot to have a warm furry kitty on my lap"! Luckily we have got an electric fan so mum and I have been spending a lot of time sitting in front of it. I have also found some shady places in the garden to get away from the sun. Can you see me in this picture? 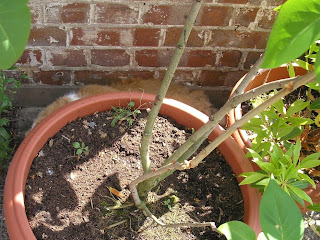 This is my new favourite hiding place. But I have to be careful in case dad decides to water the plant pots...last night I nearly got watered!
# posted by Fat Eric @ 2:51 pm 27 comments