Hooray. My humans are home from Devon, after doing a lot of celebrating of Devon Grandma's 80th purrthday. I survived with the help of Uncle Andrew. I am so glad that everything is back to normal now, and my humans have agreed to stay home for a long time after all their travels. I have recovered from kitty jail and I am used to being back in my own house now. It is nice sunny weather and my humans still have some holidays left. My dad has taken a few more days off work to play with me (well, I think he also wants to spend some more time with Uncle Sim before Uncle Sim goes back to Montana next week) and my mum has another week before she goes back to school (her leg still does not walk properly but she is going back anyway, with limitations).
My relatives from Mericky who came over for Devon Grandma's party remembered to bring supplies of Greenies with them, which is good. Here I am enjoying the sunshine with my Scratchy Mouse and thinking about delicious Greenies. My mum has been combing me because I got a bit matted while she was away. Don't I look handsome today? 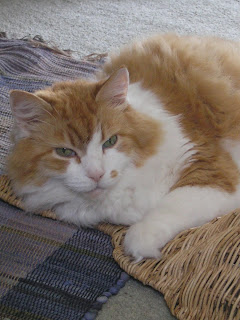 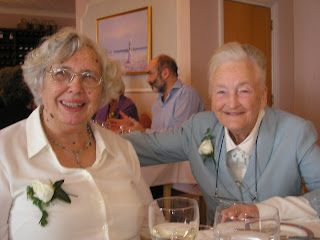 My mum was exhausted after a couple of days of purrthday celebrations, she can't keep up with the party pace set by Devon Grandma! So she is tired out, but that is OK because it means she just sits still and I get to purr and drool on her. Must get back to doing that now!
# posted by Fat Eric @ 9:19 pm 23 comments

So, the good news is that I survived the six nights in the kitty jail, where the staff were pretty nice to me, and on Friday morning my humans came and rescued me and took me home. I was very happy to be home, and even happier that my dad wouldn't let my mum adopt the two teeny black kittens who were working very hard to get taken home with us from the adoption section at the kitty jail. After I got home I demanded an enormous meal and then set about shedding my furs all over the suspiciously clean house, stinking up my litter box and making my garden smell less like Evil Intruder Kitties and more like me. I have also been catching up on laptime and spending a lot of time sitting on my mum (who is allowed to start putting some weight on her broken leg now but she still can't really walk on it so she is still relying on the crutches and the wheelchair, but that doesn't matter when it comes to giving a kitty his laptime, right?)

That's the good news. The bad news is that today, just when I was starting to feel at home again, I found out that my humans are abandoning me again! Tomorrow they are going down to Devon for three days to attend Devon Grandma's 80th birthday party on Monday (the party of the decade apparently). My mum thinks a car journey to Devon Grandma's would be too traumatic for me straight after the kitty jail, so I am staying home with Uncle Andrew coming round to feed me. But no laptime with my mum! *sob* How can they do this to me?
Devon Grandma's party is being held in a hotel in Sidmouth - the hotel is on the seafront and just a few streets away from Milo and Alfie's house. Lots of humans are coming from far and wide (including Uncle Sim and Aunty Jan from Montana), but it doesn't seem like kitties are invited!
My humans are going to pay dearly for all this neglect when they get back (my mum is going to owe me a lot of laptime!). However, I do love my Devon Grandma, so I would like to wish her a Happy 80th Purrthday anyway!
# posted by Fat Eric @ 11:16 pm 20 comments

I can't believe it. The ingratitude. All these weeks I have been lavishing care and attention on my mum's leg, and how does she repay me? Tomorrow my humans are going off to North Yorkshire (despite the leg) and I get to spend six nights in the KITTY JAIL!!!
OK, so this is the kitty jail I went to last summer, where they treat me like a celebrity, but even so, it is deeply traumatic! And OK, so I get to take my Scratchy Mouse, a bag of Greenies, my Gizzy quilt and various other home comforts, but I'd rather be at home!
Think of me languishing in prison, my friends, until I get released next Friday... 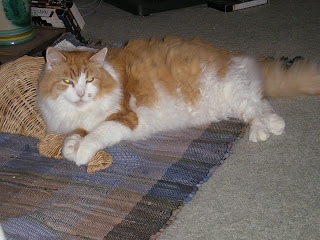 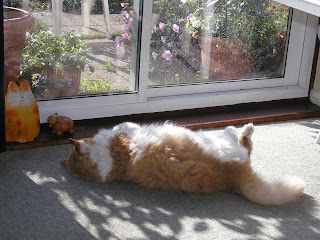