HELLO, I HEARD IT WAS CALLED BLACK FRIDAY TODAY ON THE CAT BLOGOSPHERE SO HERE I AM!!!
MY NAME IS MARMITE AND I HAVE BLOGJACKED THE FAT GINGER CAT'S BLOG FOR THE DAY! THE FAT GINGER CAT IS SNORING IN HIS FLEECE BED AS USUAL SO HE'LL NEVER KNOW!
I'VE ACTUALLY BEEN FEATURED ON THIS BLOG BEFORE. YOU MAY REMEMBER I GOT CAUGHT EATING SOME FEV-VERS SOME TIME AGO. THIS WAS ME! 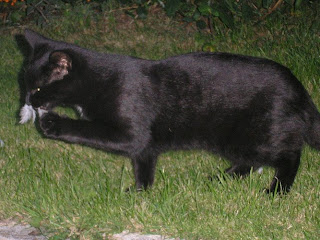 I ALSO GOT CAUGHT SITTING ON THE SHED ROOF - THIS WAS ME TOO, TAUNTING THE FAT GINGER CAT! 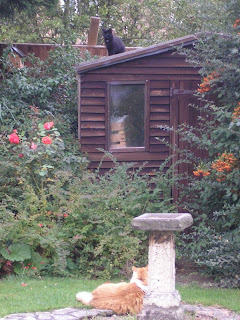 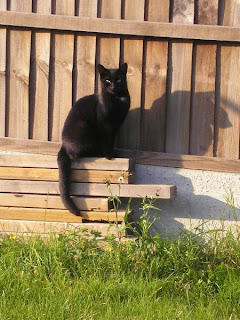 UH-OH, THE SNORING HAS STOPPED, I THINK THE FAT GINGER CAT WOKE UP! I'D BETTER GO...BUT I'LL BE BACK SOME DAY FOR MORE BLOGJACKING! HAHAHAHAHAHAHAHAHA!
THIS IS MARMITE, ON BLACK FRIDAY! MIAOW!
# posted by Fat Eric @ 10:20 pm 23 comments

Today I have invited a guest mancat on to my blog. His name is Longie and this is his story.
Waaaaay back in July 2006 I posted about a good friend of my mum's. She and her family were sad. They used to have three kitties called Nessie, Fluffy and Lulu. But in the same week, Nessie had to go to the Bridge because she was ill and Fluffy disappeared from their garden, never to be seen again. Lulu and her family were sad and lonely. That was quite a while ago. Lulu's mum feeds stray kitties who come to their garden. One day, some time after Lulu became an only cat, a stray ginger kitty turned up and decided they were a nice family and he would like to move in with them and be Lulu's new brother. Lulu was not sure about this. The stray ginger kitty was not very healthy. He was very very skinny with very tangled fur and he had sores and bites all over him (a flea allergy was not helping). He also had some sort of respiratory infection, so he was a very sad sight. He made it clear to Lulu's family that he was NOT LEAVING because he had moved in for good! They took him to the v-e-t and after quite a long time and quite a lot of money later he was a healthy kitty again. He would prefer to spend all day sitting on a human lap if there is one available but otherwise the most comfortable chair will do! Eating is his other favourite activity. The children of the family decided to call him Longie because he has long fur (kids can be so imaginative!) Longie is not best friends with Lulu but they have learned to live together fairly peacefully. She prefers the bedrooms where she can sleep with the humans at night, and he prefers the kitchen where the food is and the living room where the comfy chairs are.
My mum went to visit Longie and Lulu the other day, and got sat on and purred at by Longie. This is what Longie looks like now. I think this is a happy ending for this Guest Mancat, don't you? 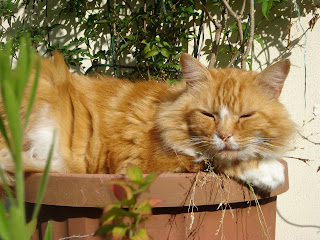 Wake Me When It's Spring

Another dusting of snow this morning. Bloomin' cold outside. Can't believe my mum still went out there gardening. I'm staying indoors where it's warm. Wake me when it's spring. 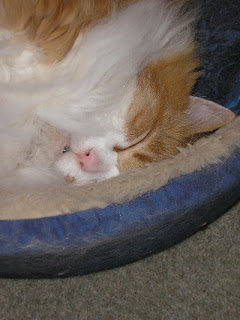 Today every cat in the Blogosphere is marking Fierce Fighter Friday, which Whiskers and Purrs started to remember Felix the Fierce Fighter and all the other Ones Who Came Before. In our house we are remembering my twin sister Hattie. When Hattie and I were at the shelter looking for a new home, she was the one who got us adopted by our humans by giving them lots of purrs and floofy headbutts (because I was napping and missed them!) So you could say she brought me together with my mum. I thought Hattie and I would always be together but she got cancer and in March 2004 she had to go to the Bridge. She was 8 years old. We can't believe that was four and a half years ago already - I just turned 13!
As you can see Hattie looked a lot like me, but smaller. Here she is. 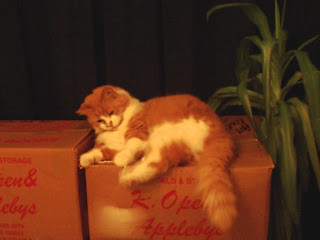 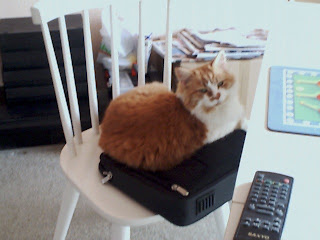 This is my mum's favourite picture of the two of us together. 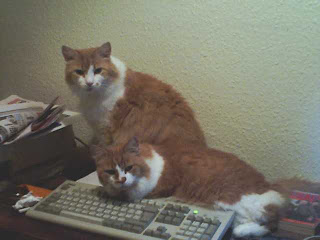 Purrs to everyone else who is remembering the Ones Who Came Before today.
# posted by Fat Eric @ 8:40 pm 14 comments

This is my fleece bed behind the armchair in the living room, next to the radiator. It is actually a d-o-g bed as the so-called cat beds on sale were of insufficient width to accomodate my manly frame. 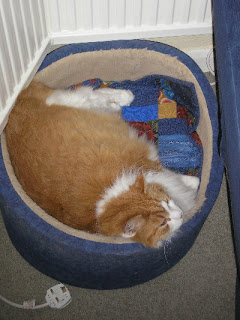 I have an interesting relationship with this fleece bed. During the summer I completely ignore it. I never go near it. I pretend that it does not exist. Then, one evening every October when it starts getting chilly in the evenings and my mum starts turning the heating on for an hour or so, I suddenly remember that my fleece bed exists and I go and find it again. Then I spend hours in it every day snuggling by the radiator. But then, each spring, in early April when things start to warm up, I abandon my fleece bed again and won't go near it until October. My humans think this is very amusing of me. I suppose you could call it my "winter bed".
As it is November, and quite chilly and damp at the moment, I have been spending a lot of time in my fleece bed lately. I wonder if any of my friends have places they only go in at certain times of year? 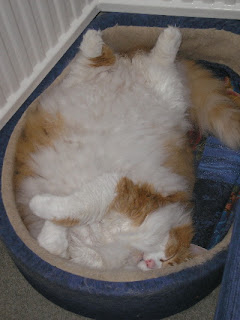 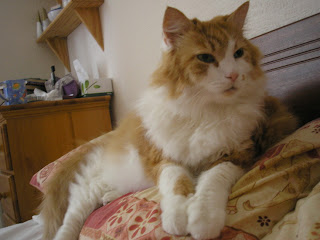 We have a stand-off. The human wants to change the bedclothes, I want to be undisturbed on this pillow! So no, she can't take off the sheet or the pillowcase!

I am very thankful that my humans have been shopping. I was down to my last tin! 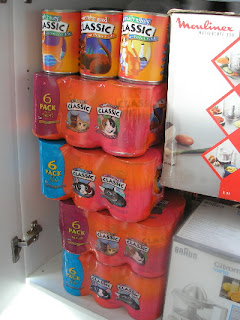 Today it rained. Yes, again. My mum's school was closed today so she went into central London to do a pre-visit at the museum where she is taking her class in a few weeks. Then she walked across the Millennium footbridge over the Thames to St. Paul's Cathedral because she was meeting my dad for lunch and he works quite near there. When she got to St. Paul's she was surprised to see the front entrance was sealed off and lots of policemen were standing around. Then she noticed the big burgundy Daimler parked right in front of her with the Royal Standard flying on it. She wasn't expecting to see the Queen come out of the Cathedral with Prince Philip just then and get into her car. They had been to a special service at the cathedral. There were some Mericky tourists right next to my mum, they got very over-excited about seeing the Queen! This is what H.M. was wearing today...

Apparently the Queen is having a huge party at Buckingham Palace tonight for Prince Charles's 60th birthday. Do you think my invitation got lost in the post?
# posted by Fat Eric @ 10:59 pm 17 comments

OK, the weather is getting worse. Now it's not just raining, it's blowing a hoolie outside (and if you don't know what that means, there's a definition here!)

I have been shamefully neglected this weekend. My mum has had lots of planning to do, and she keeps throwing me off the keyboard when I try to sit there to help her. So I have had hardly any blogging time, OR lap time! Plus, the weather has been too horrible for me to go outside in the garden and try to catch that pesky little black intruder cat who thinks he lives here (and don't think I don't know, mum, that you have been giving him Temptations behind my back because you think he's cute).

Might as well just hide my face again. I have to thank my Cornish Auntie for taking the last two pictures of me. Funny how everyone likes to take pictures of me! 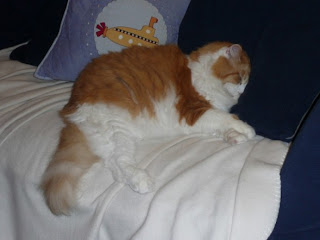 Not a good Friday for my mum. First a sticky little person in her class threw up (a lot) in her classroom, then when she got home I had thrown up in the kitchen! (hey, at least I did it on a wipeable floor and not on the carpet like that kid!)
Better just block it all out and wait for Saturday... 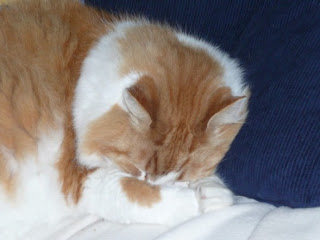 The Fifth Of November

I am hiding in my cat bed behind the armchair with my paws over my ears. There are so many bangs and explosions going on outside, it sounds like World War 3!
From our upstairs windows we can see the great big firework display at the Town Hall without having to pay for it. My humans didn't go out to watch the fireworks this year because it's cold and raining. Yes, raining. Again. But us cats aren't very interested in fireworks anyway. 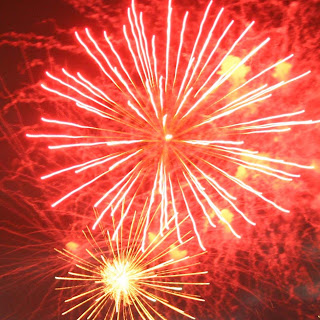 Remember, remember the Fifth of November,
Gunpowder, Treason and Plot,
I know of no reason
Why Gunpowder Treason
Should ever be forgot.
Guy Fawkes, Guy Fawkes, t'was his intent
To blow up King and Parliament.
Three-score barrels of powder below
To prove old England's overthrow;
By God's providence he was catch'd
With a dark lantern and burning match.
Holloa boys, holloa boys, let the bells ring.
Holloa boys, holloa boys, God save the King!
# posted by Fat Eric @ 8:39 pm 22 comments 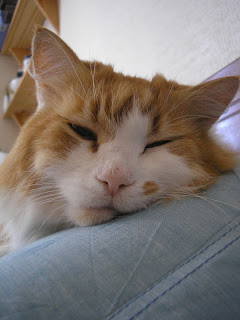