So, after a quick bit of sunshine last weekend, this week it has rained enough so far to make my humans discuss building an Ark.
I needed something to cheer me up. My mum got some presents. She got some thank you cards from some of the children she took to Norfolk last week. And one of them gave her some chocolates. And one of them gave her a fruit basket (his dad is a greengrocer). Which was very nice.
But none of them gave her any cat treats! I think I am missing out!
I don't care about the rain any more though. Tonight we watched the most fantastic game EVER!!! My mum says it's the happiest she's been in 39 years of supporting the Blues. Now all we have to do is work out how to get to Moscow for the final in 3 weeks...I wonder if there are any catbloggers there?
# posted by Fat Eric @ 10:32 pm 13 comments

I can't believe it has been over a week since I posted. Thanks so much to my fellow Man-Cats for coming over to help me trash the house while my mum was away. Unfortunately my dad insisted on cleaning up before she got back.
She survived a week in Norfolk with 24 children and they did lots of exciting things like going in boats on the Norfolk Broads, going on an assault course, going out in the dark to see barn owls, going out to sea in another boat to watch grey seals, walking miles across sand dunes, and so on. Also they went bowling one night and my mum won the staff bowling competition so she was happy about that. Here I am inspecting her luggage when she got back to make sure everything was in order. 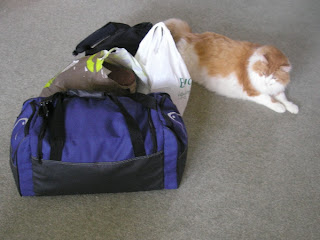 She was pretty tired when she got back on Friday so we did lots of snoozing on Saturday. The weather was lovely and so I helped her do some gardening later. Here I am enjoying the first really warm rays of sun this year; relaxing and sniffing the air. 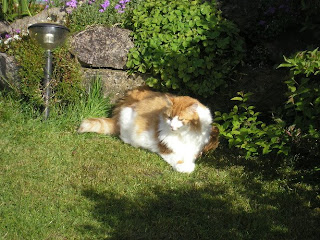 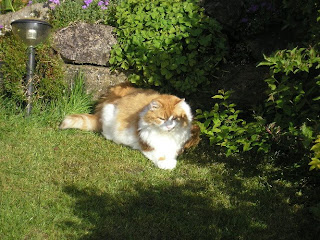 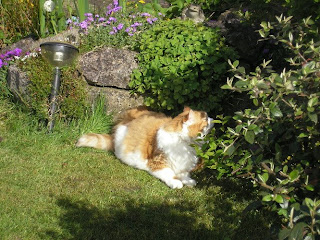 Unfortunately the weather is rainy today. Oh well, maybe the sun will come back soon! Happy purrthday and happy gotcha day to anyone whose special days I missed while I was offline. I will try to catch up now.
# posted by Fat Eric @ 9:52 pm 20 comments

I've had a really nice week spending time with my mum while she's been on holiday from school - gardening, watching TV, playing on the computer - we've had so much fun I've almost managed to forget the recent trauma of kitty jail.
But now!
She's leaving me again! How could she?
At least I won't be in the kitty jail this time. She's going to Norfolk for a week starting tomorrow and I am being left in charge of my dad and the house. It's a big responsibility!
She claims it isn't really a holiday because she's going with 24 children from school and some other teachers and having to supervise children from morning till night. They are doing lots of outdoor adventures and going in boats. I think she might be quite tired when she gets back on Friday night.
My dad is more generous with the food than she is but he's not so good at snuggling or scritches and his lap isn't so comfortable. Also he hardly ever lets me go on the computer, so I'm going to get all behind at reading my friends' blogs again.
As we're having a "men only" week in our house, maybe some of my friends from the M-Cats Club would like to join us for a little party? We can make a big mess and that'll teach my mum to abandon me!
Come and help me snoopervise my dad! 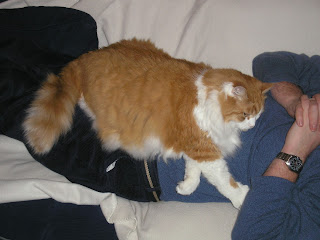 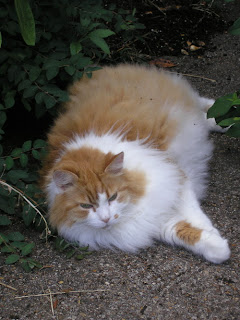 I am having a great day today, for several reasons:
First, I am very very happy that my friends, Mu Shue, Lilly and Iris have been found safe after the fire in their building, and are back with their mum Laura. Members of the Cat Blogosphere have organised some auctions here to help them after they lost so much of their stuff in the fire. But they are all safe and well!

Secondly, my mum still has a whole week left of school holidays so we are enjoying spending lots of time together at home.

And lastly, today I got a package from Mericky! I was surprised because I was not expecting anything so I got my mum to open it and we took a look. First there was a cat card: 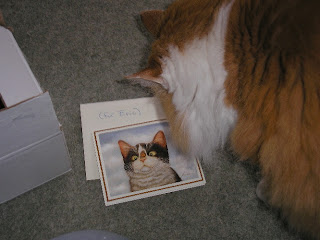 It was from Patty who lives in Idaho. She is the sister-in-law of my Aunty Jan who kidnapped my Uncle Sim and married him and took him to live in Montana. So that makes us related! Actually it was from her cats, Tory and Lacey. Tory is a very beautiful but bossy Siamese who will only eat fish flavors. Lacy is a very sweet gray tabby...also a big seafood fanatic. The card said, "when they heard their English cat cousin Eric was deprived and wasting away from lack of local Greenies, they insisted that I immediately send poor Eric a new supply."

GREENIES! I immediately investigated the box: 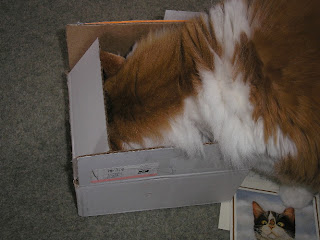 Look! Look what was inside! 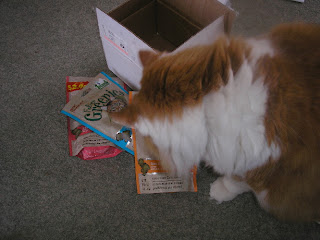 THANK YOU, Patty, Tory and Lacey! What a great day I am having! 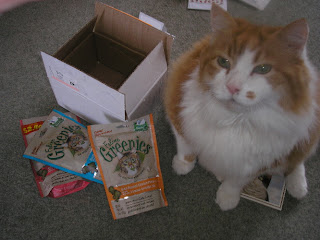 The whole Cat Blogosphere is shocked to hear about the terrible fire in Laura's apartment building in Massachussets yesterday. She has lost everything and so far there is no news about what happened to her cats, Mu Shue, Lilly and Iris, who were inside the building at the time, but it doesn't look good at all. This is a such an awful thing to happen, we are joining everyone else in hoping that by some miracle the cats managed to escape. Please send purrs and keep them in your thoughts. 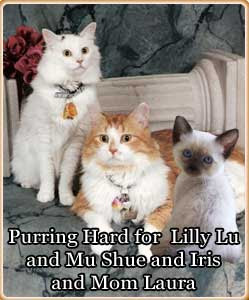 Thank goodness for that. Yes, I survived, but only just. Would you believe that after having no snow all winter, it decided to snow while I was in kitty jail? I could have been frozen! (if I hadn't been in a heated kitty house, but that is just a detail!) My humans were in Snowdonia in Wales and got lots and lots of snow. I have got many pictures to post later.

My mum is not too impressed with the kitty jail this time, so I don't know if I will be going to that kitty jail again. She paid them extra for grooming me but I came home with lots of mats in my floofy fur so she doesn't think they did a great job. At least I got fed! (I had to take my special food with me).

My dad has gone back to work but my mum still has over a week left of school holidays and has promised to spend quality time with me. I have been sticking very closely to her all day today just in case she disappears again.

My Cornish Grandma spent last weekend in hospital after she had a fall at home. They have let her out of hospital now but she hurt her knee when she fell on it so she has to use crutches. Luckily her neighbours and Cornish Auntie are taking it in turns to walk her woofie because she can't. I am purring for a speedy recovery for my Cornish Grandma!

I expect I have missed lots of interesting stuff going on around the Cat Blogosphere while I was stuck in jail. Time to catch up!
# posted by Fat Eric @ 7:30 pm 15 comments

Today my mum broke up for two weeks' spring holiday from school. I thought this was good - lots of quality time for her to spend with ME! But then...I found out the terrible news that tomorrow she and my dad are going to Wales for four days and I have to be incarcerated in the kitty jail until Wednesday!
Noooooo! I don't want to go to the kitty jail! I was just enjoying the spring weather and lying in my garden looking at the flowers. How can they do this to me?
I need a place to hide where they can't find me when they want to put me in the Evil Cat Carrier tomorrow morning. Or failing that, I need a posse of my friends to break me out of kitty jail!
Help!
P.S. My only comfort is that Scratchy Mouse is coming with me.
# posted by Fat Eric @ 8:51 pm 25 comments 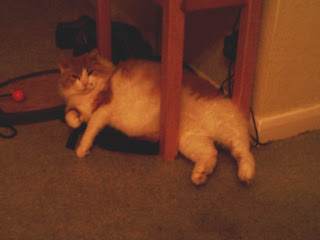 I had the weirdest dream. I dreamt mom and dad went to London. Way over across the Atlantic Ocean.
I dreamt they rode in the top of a double decker bus. One with no top! 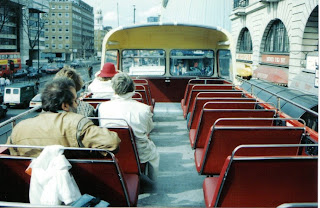 I dreamt they went to the Tower of London. 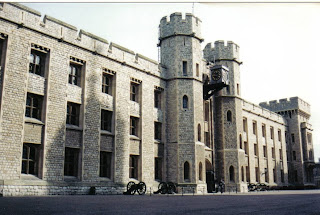 And that they saw some Beefeaters. 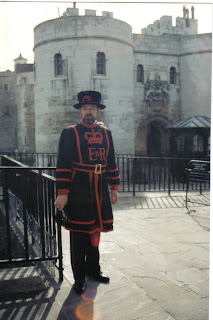 And that daddy was fresh and thought the Instruments of Torture & Punishment sign was a hoot. (That is very like daddy.) 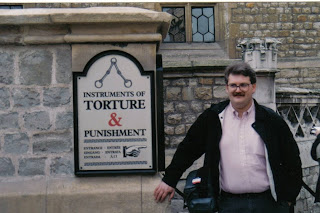 I dreamt they went to Warwick Castle and walked the walls and that mom thought that was really cool. 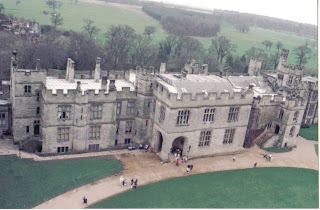 I also dreamt they went to Stonehenge and that dad said he was freezing his butt off because the wind was wicked. 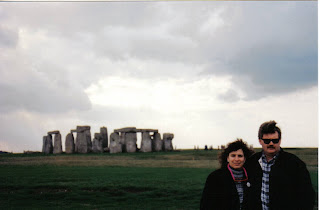 I also dreamt that they went to Fountains Abbey and dad pretended he was one of those saintly statues that stood there forever. 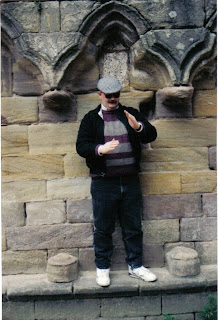 That was such a scary thought that it woke me right up and I had to check that mom and dad were sleeping next to me. They were. Phew!
Heh heh, Roxy and Lucky took over my blog for the day and did their own post! But where did I go? Try looking here.