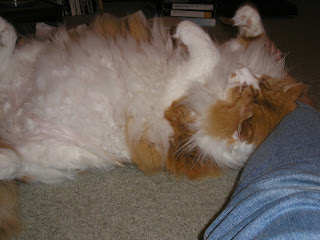 The earth moved last night, it really did! OK, it didn't move very much here, because the centre of the quake was in Lincolnshire, but the earthquake could be felt where we live. It happened last night just before 1 a.m. when we were all in bed. My dad was asleep and my mum was dozing and nearly asleep and I was dozing too. Suddenly the bed started to shake a little bit. My mum said to my dad and me, "Is one of you shaking the bed?" but I said it wasn't me and dad didn't say anything because he was still asleep and missed it all. After about five or six seconds the bed stopped shaking and mum thought maybe she had imagined it and she and I went to sleep. When the radio alarm went off this morning all the people on the radio were talking about the earthquake and my mum realised that is what we must have felt.
I know some cats live in places that get REALLY BIG earthquakes but this one was quite big enough for us, thank you.
You can read all about The Great British Earthquake here.
P.S. Thank you to my friends who asked if we were OK! 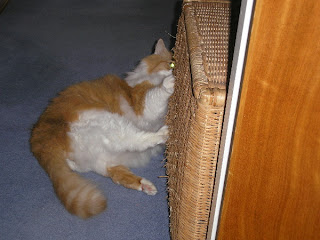 The laundry basket is still not dead.

Usually my blog features pictures of handsome me. But today I thought you might like to see some pictures suggesting that Spring may actually have Sprung around here. The frosts seem to have gone away again and today is windy but warmer. I know some of my friends in far-away places are still up to their tails in snow, so maybe you would like to take a tour and see how my garden is looking today?
Let's start at the front gate. On top of the wall by the front gate there are some crocuses out. 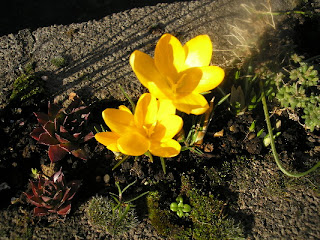 Near the front gate there are some winter hellebores and winter jasmine still flowering. 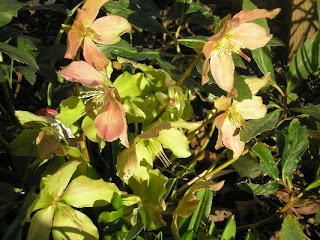 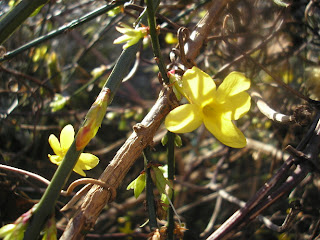 On either side of the front door there is a pot that looks like this: 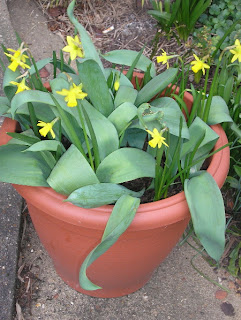 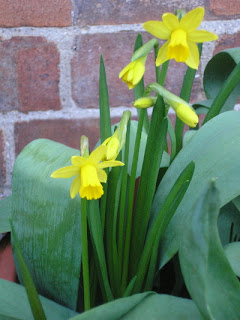 Meanwhile in the back garden it is starting to look more spring-like. Let's walk down to the bottom of the garden. By the back fence the quince has blossom on it. Last year my mum made quince jelly for the first time. You can see the roof of our neighbour's house behind. 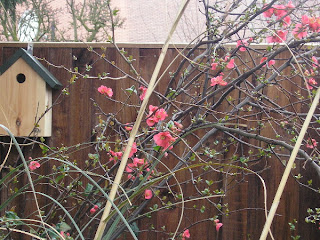 My dad's rhubarb plant is looking quite healthy. Maybe in a few months my humans will be eating rhubarb and custard! (I love custard). 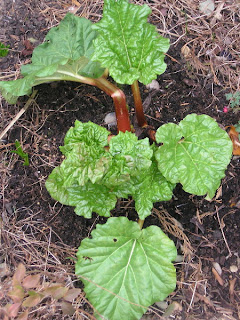 The first daffodils are in flower in the back garden. But there are lots more only in bud, not out yet. 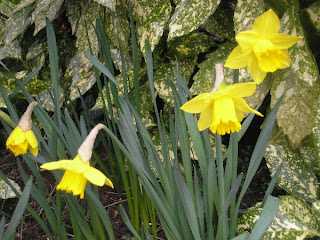 And more crocuses not out yet. 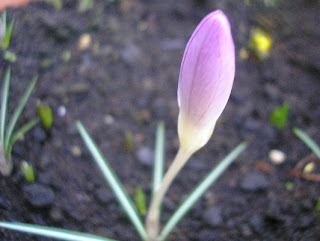 My mum has some pots of bulbs on the patio where we can see them out of the window. There are more crocuses, hyacinths, etc. I like looking at them but I wouldn't go outside today because it was too windy and my fur was getting blown about and untidy. 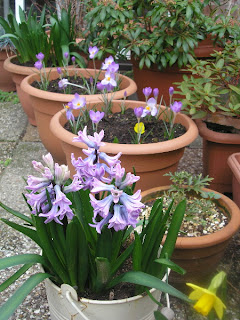 I'm going to make an official declaration - in our garden, Spring has finally Sprung!

I have always known that I was a handsome mancat, but now I am an official member of the M-Cats Club so I can hang out there with my mancat friends whenever I want. There was a good party there this weekend. And now I have my official club badge; do you like it?

Thanks, Mr. Tigger, for making the badge for me.
The last few days here we have been having very cold nights and very sunny days. When we wake up there is frost on everything and the pond is frozen solid. (We still haven't had a single flake of snow in London this winter). During the day it is sunny and everything starts to thaw, except for the shady bit in the corner of the garden where the frost stays all day. Today was the start of my mum's half-term week off school. My dad was at work so my mum and I got to hang out together all day. We spent quite a long time watching the little birds in the garden. Then I decided to go out and sunbathe for a while. I haven't been able to do that for ages. 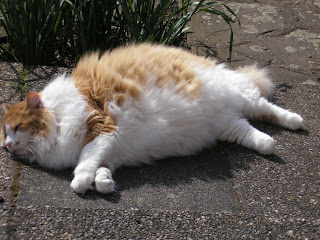 After about half an hour I decided that, although it was sunny, it was still a bit cold, so I did some napping on the fleece blanket on the sofa instead.
Oh yes! and I got a little present in the post from my friend Tabs! (See here for an explanation of who Tabs is). She sent me a new treat ball with some treats already in it! How thoughtful. And a nice note. Big purrs right back at you, Tabs! And thank you very much!
P.S. My mum estimates the treats were all gone approximately 2.5 seconds after the opening of the package...
# posted by Fat Eric @ 8:50 pm 27 comments 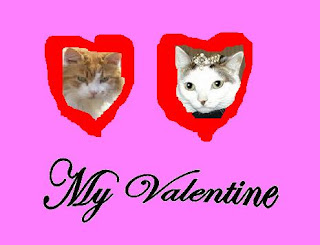 Here is my Valentine's Day offering to my girlfriendcat, the lovely Princess Pearl. I am not much of an artist but I always think homemade cards are better, don't you? Don't you think Pearl and I look very handsome together, too?

I meant to put my Valentine's card up earlier but it's all been rather busy here. Yesterday was my dad's purrthday (I gave his hair a very good licking as a present), then today at my mum's school they had an exciting day. Just as all the children and teachers were eating their lunches, all the power went off, the lights went out and there was a strong smell of burning. They had to evacuate the school and call the fire brigade. It was a pretty cold day for standing outside in the playground, too. Then they wanted to send the children home but none of the phones were working, either... It turned out that a squirrel had got into the roof and eaten through some Very Important Cables - the squirrel was found electrocuted by the firemen. R.I.P. squirrel.

It was all very exciting and my mum ended up getting home early which meant my dinner was early! Yay! She does have to go into school tomorrow and then she gets a week off for the half-term holiday which means she can spend lots of quality time with me!

Happy Valentine's Day everyone, hope your week is being as exciting as ours!
# posted by Fat Eric @ 6:27 pm 19 comments

Caught In The Act 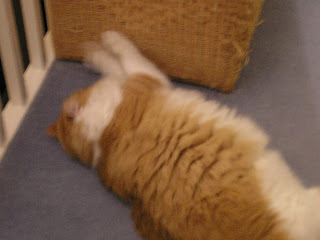 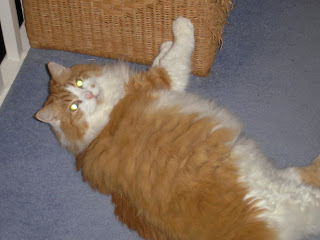 I have decided to forgive her. The tuna helped a lot. 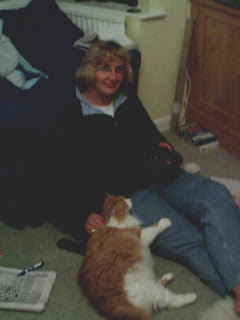 P.S. She wants me to tell you that she did tidy up the floor later!

A Grovelling Apology From My Human

Right mum, time to get over here and make a grovelling apology.

Because you have to apologise to all the Gorgeous Gingers for failing to do your job, don't you?

Come on now, admit what you did to the whole blogosphere.

I...er...forgot that some of your Gorgeous Ginger friends had sent their pictures to you, Eric, to add to the Gorgeous Gingers page. And I...er...lost the folder of pictures on the computer for rather a long time.

Now come on, admit it - HOW LONG had some of my friends been waiting for their pictures to be added to the GG page?

It had better not! Now, have you made sure that all the Gorgeous Ginger cats who sent us their photos have been added to the page?

And who are the newest members of our wonderfully handsome ginger gang?

Er...William's brother Russell...floofy Goldie...Manx ginger Mr. Poot...handsome Sandy...Yuki and Kimiko's brother Kintaro...and ginger siblings 3Perf and Winton!
And how many Gorgeous Gingers are on our page now?
Well Eric, you'll be happy to know that there are now EIGHTY-SEVEN members of the Gorgeous Gingers, plus fifteen Rainbow Gingers.
That is a LOT of gingery gorgeousness! And do you promise that any other ginger friends who sign up and send us their photos will be added to the page STRAIGHT AWAY?
Yes Eric. Whatever you say Eric. I'm very sorry Eric.
All right, I accept your apology and I hope my fellow Gingers can find it in their hearts to forgive you too. Now give me some tuna!
# posted by Fat Eric @ 10:28 pm 21 comments

We have a bit of an "issue" in our house at the moment. My dad and I are fighting over who gets to sit on the sofa. We do have chairs and other places to sit, you understand, but my dad and I both like the sofa best. We have tried sharing it but we both really prefer to have it to ourselves. When my dad is sitting or lying on the sofa I sit next to it and give him a Very Hard Stare and go, "Mow, mow". My mum says, "Eric wants to sit on the sofa," and my dad says "Well, he can't, he was lying on it all day when I was at work and now it's my turn." I wait until he gets up to make a cup of tea or look for the remote controls and then I jump on the sofa like lightning and stake my claim.
Yesterday he wouldn't get off the sofa for ages and ages and I got tired of waiting for him to get off so I jumped on his stomach and then squeezed between him and the back of the sofa and started pushing him off, and then sat on his chest and waved my tail in his face. He got the message.
Of course the sofa should be mine - look how comfortable I am on it! 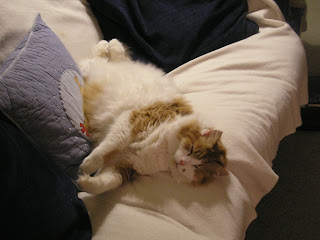 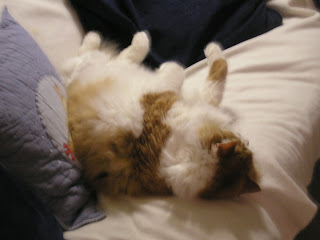